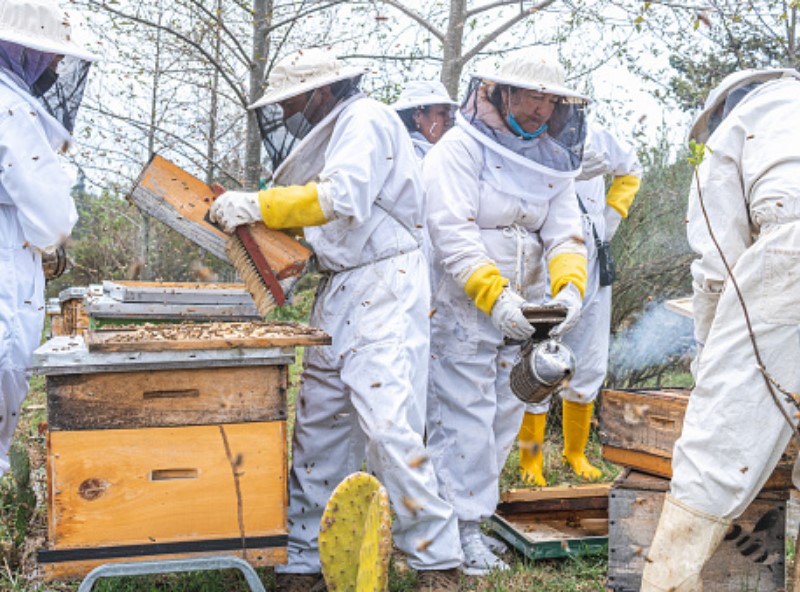 Some beekeepers often find themselves confused when it comes to scheduling the use of a gas oxalic acid evaporator when the brood is present. Other people suggest using three treatments that are 5 days apart, while some recommend three treatments at 7 days apart. Which is the best course of action, then?

It seems that the real question here is the length of time after a treatment that the oxalic acid will continue killing mites. As you might already know, a cloud of small crystals is sent into the air during oxalic acid vaporization.

These crystals quickly attach themselves to the hive and all its internal surfaces, including the woodenware, the combs, and yes, even the bees themselves. While this substance is not particularly dangerous to your honeybees, this can kill off varroa mites.

Several early reports stated that surfaces coated with the crystals were able to continue killing mites for a maximum of three weeks. However, if such claims were true, the mites would continuously get killed while emerging from the brood cells.

But ask any beekeeper and they will tell you that this is not the case at all. Some of the latest reports reveal that the oxalic acid levels in the hive go back to normal almost right away following the use of a gas oxalic acid evaporator, which seems to make more sense.

When trying to determine the amount of time you should leave in between treatments, it is important to know how long the chemical will remain active within the hive. It may be safe to assume that there is little to no residual effect at all.

Is It Safe to Use Gas Oxalic Acid Evaporator?

Before anything else, you might want to remember that some beekeepers are not really big fans of oxalic acid vaporization. Photos and stories of haze-filled apiaries with hacking, coughing, and half-blind beekeepers are shuddering. Of course, this may be a bit of an exaggeration but still, you get the point.

This means that once you have decided to vaporize, it is strongly recommended that you read and check the EPA label on how to use oxalic acid in beehives. You also need to read the MSDS or Material Safety Data Sheet for oxalic acid and go over the instructions that came with the respiratory that you bought and plan to wear.

Be sure you also practice fitting your respirator to your face and inspecting for leaks and ensuring that you bought the correct cartridge. The respirator is not working if you can still smell the acid.

It seems that beekeepers are somewhat too cavalier when it comes to breathing in the vapor of oxalic acid. But while many of them get away with this, some might not.

The remaining discussion takes on the assumption that there is little residual activity following the use of a gas oxalic acid evaporator.

The varroa mites below the capped brood cells may still have some sort of protection from the oxalic acid crystals. However, the phoretic mites or those that move through the hive freely or ride on adult bees are going to get killed off by it.

Say, for example, you applied for the treatment on July 1. All of the phoretic mites will theoretically die in one to two days. However, you have around 12 days of varroa mites getting ready to emerge. Why 12, you ask?

This is because the development of the brood occurs in three stages. For 3 days, the brood will be in the egg stage. It will then be in the larval stage for up to 6 days, while the capped or pupal stage lasts for 12 days. The general rule of thumb here is that every stage will be twice the length of the earlier one. Simply put, 3 plus 6 plus 12 is equivalent to 21.

Since some may correct this, it is important to point out that the brood cycle is somewhat shorter since the larval stage is almost 5.5 days. This means that the entire brood cycle is closer to 20.5 days rather than 21. However, since many people use 21 days as the brood cycle and due to some variability among the different populations, it is best to stick with this.

The larval and egg stages don’t count for that much here since mated female mites don’t climb into brood cells until right before these are capped. The mites basically ignore early-stage larvae and honeybee eggs.

Once again, after the initial treatment, you would have a shed load of lifeless mites and safely capped mites of 12 days’ worth. During each of the following 12 days, a few mites will be emerging together with the brood. The emerging mites are already mated and will be ready to go.

They presumably attach themselves to honeybees and ride around on them until they get taken to a brood cell that is ready to cap. They can detect it, possibly y scent, then scurry inside where they bury themselves below the brood food.

It is important to treat them enough using a gas oxalic acid evaporator to kill off the emerging mites. However, it shouldn’t be done too often to the point that the bees are injured. Several reports claim that the workers and drones don’t suffer from damage because of constant oxalic acid exposure since these only live for around 4 to 6 weeks.

The queen, on the other hand, is a bee that lives a long time but is more prone to damage due to repeated exposures. It is unknown how many treatments queen bees can stand but whatever it is, it makes more sense to avoid treatments than necessary.

Using a gas oxalic acid evaporator can work wonders on your beekeeping experience. However, just like anything, it is always important to take the necessary precautions to ensure that the treatment work as intended and avoid posing danger to your brood.